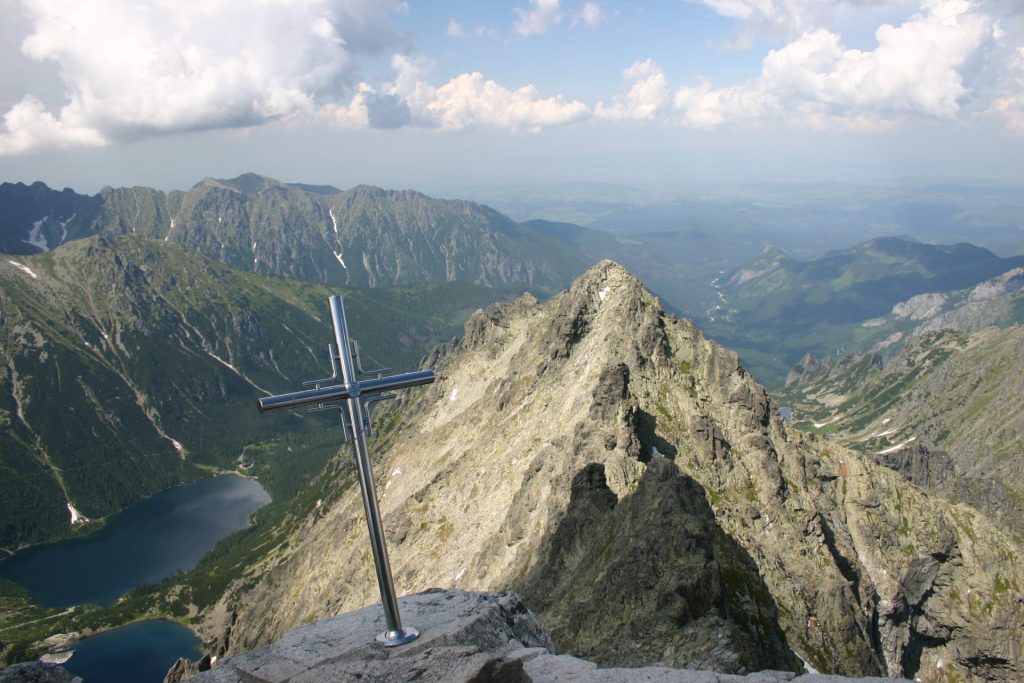 Rysy (2499 m) is the border peak between Slovakia and Poland in the main ridge of High Tatras. It has 3 peaks – prospective north-western (border) one, middle (main) one and south-eastern, the shortest one. There are three ridges running from the peak – to the north towards Malé Rysy, to the south through saddle Váha towards Český štít and to the west towards Žabí kôň. Rysy belongs among the most visited Tatra peaks. For the wide perspective which it provides, it was propagated before the 1st World War as Hungarian or Tatra ‘Rigi’. The first known ascent was performed by the administrator of Starý Smokovec Eduard Blásy (1820-1888) with a mountain guide Ján Ruman Diečny Sr. on the 20th of July in 1840 and later on the 10th of April in 1884 by Teodor Wundt with Jakub Horvay. The first ascent was remembered by the marble plaque in the 90s of the 19th century. Marie Curie-Sklodowska (1867-1934) with her husband Pierre visited Rysy in 1899 and later in 1913 there went Vladimir Ilyich Lenin. Rysy has got three peaks in the main ridge of High Tatras.

We can get there from the tarn Popradské pleso (blue trail ) and from there (red trail ) to the peak.

We can see Morskie oko and Czarny staw from the top.

Hike from Popradské pleso to Rysy

All-day interesting hike for tourists in good physical shape. Starting from tram station Popradske Pleso the asphalt road leads us to the tarn Popradské pleso (1:15h ) and two nearby standing chalets: Chata pri Popradskom plese and Majláthova chata. Here we can relax, refresh ourselves and recover before the climb to the peak. If we […]