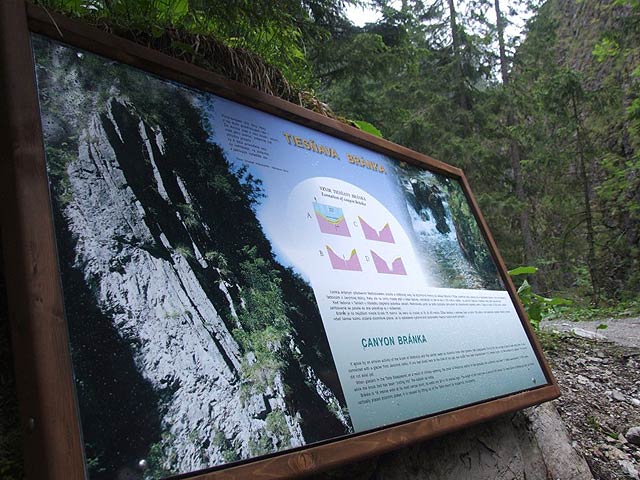 The educational trail Zadné Meďodoly leads along the hiking trail on the border of the High and Belianske Tatras – partially through the valley Javorová dolina and the whole valley of Zadné Meďodoly. On the blue-marked hiking trail there are ten information boards. The tourist can learn more about fauna and flora, the history of the valley, the rocks and water, what troubles the Tatra forest, the bear as the ruler of the forest with a demonstration in the form of two wooden statues, shepherd’s wars and copper mining. The eight and a half kilometer long educational trail starting in Tatranska Javorina at the bus stop Pošta and ending in Kopské sedlo with a total ascent of 768 meters can be without much haste walked in three hours. The texts are mostly bilingual – Slovak and English. The trail is open to the public only during the summer season from June 15th to October 31st.

In Javorova dolina there is a unique geological exposition with three panels and a board with photographs and a detailed description of the very creation and shaping of the Tatras, up to its present form, as well as rock exhibits. We start in Tatranská Javorina at the Pošta bus stop, continue 0.30 h. along the […]

This valley is bordered from the right side with Belianske Tatras. The highest part of the valley which turns to the east is called Zadná Javorová valley. Javorová dolina branches off into valleys Zadné Meďodoly, Kolová dolina, Čierna Javorová dolina and Suchá dolina. There are also several tarns situated in the valley: Žabie Javorové pleso […]