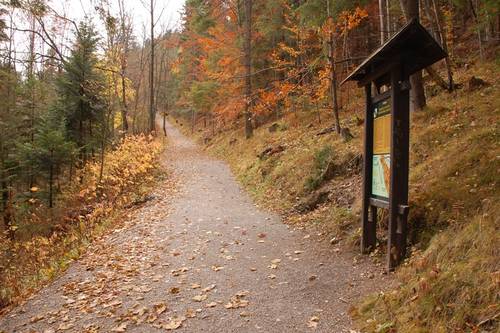 This trail leading from Tatranská Kotlina to the Belianska cave has 6 stops dealing with geology and speleology.

Educational trail Fľak is located in Tatranská Kotlina and points to the history of local forests and forestry technical monuments. There are 10 stops with information panels in total and the route forms a closed circuit. The first part of the trail starts at the bus stop Čarda. If we arrive by car, there is […]

The wild boar reservation serves as one of the ways to see the wild boar behind the safety of the fence. The wild boar is in the natural environment of the forest, where it raises its young. In these fields, one has the opportunity to see it in situations where it would be dangerous in […]

The village of Ždiar was founded at the beginning of the 17th century on the Vlach law. It belonged to the Lendak estate, later to the Horváth-Palocsay family. In 1787 it had 120 houses and 794 inhabitants, in 1828 155 houses and 1118 inhabitants. They were farmers, shepherds, coal miners and since the 19th century […]

The museum was opened in the birthplace of J.M. Petzval in Spišská Belá in 1964. The first exhibition was made according to the script of prof. Rudolf Skopec from Prague, an expert in the history of photography. He based it on his publication “Dějiny fotografie v obrazech od nejstarších dob k dnešku” (History of Photography […]

Museum of Folk Culture in Lendak

The Museum of Folk Culture in Lendak was established in 2003. Lendak is a village in which folk traditions persist to the present day, costumes are still worn, the inhabitants know and also speak the original Goral dialect. In the museum, visitors will get to know the way of life of local ancestors. Two exhibitions, […]

The Belianska Cave is one of the most visited caves in Slovakia. In addition to the bizarre rock shapes, it is known by a rich occurrence of calcareous sinter. Although interest in the natural wonders of the cave has persisted for 125 years, the patterns of its creation have not yet been fully clarified. The […]